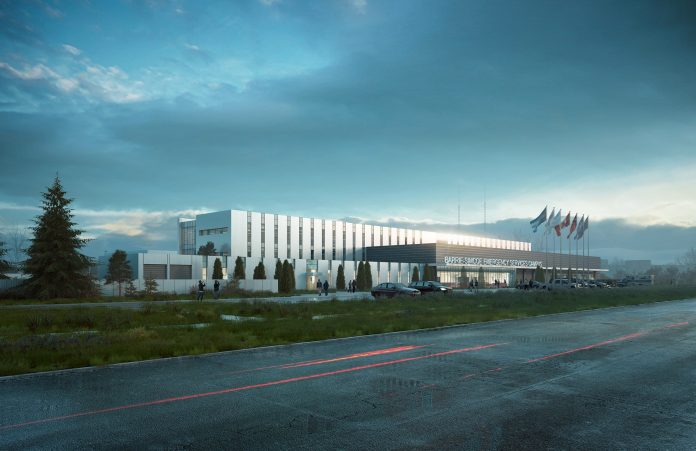 The Barrie-Simcoe emergency services campus is progressing on schedule and city police are preparing to move into the new digs in January 2020.

“Major site construction is ongoing and has been progressing well,” said Jennifer Liefl, facility planning and development manager at the City of Barrie. “However (industrial, commercial and institutional) construction union labour negotiations are underway and strike action … may impact productivity.”

The project is a partnership between the City of Barrie and County of Simcoe. Once complete, the modern facility will house the Barrie Police Service, Simcoe County Paramedic Services and Barrie Fire and Emergency Service backup dispatch communications in one location at 110 Fairview Road in Barrie.

Completion is scheduled for December and police are planning to move into their new digs in January 2020. However, labour disputes could slow down work at the facility.

It’s an innovative concept that is projected to cut operating costs for emergency services in the city by more than $350,000 each year compared to several standalone facilities. Other advantages include the use of larger, high-efficiency and robust mechanical and electrical systems and reduce project costs.

Trades continue focusing on critical path areas of work to ensure there are no delays to significant operational components of the facility, work sequences will be adjusted and on-site labour forces will be redirected to accommodate installations once labour disruptions, or the threat of strike action, is removed.

Hard construction costs are currently forecasted to be below budgeted figures by three per cent. Based on terms of the project contract, half of the savings are directed to the project team to share and the other half will go to the owner group, with the City of Barrie entitled to approximately 76 per cent of these surplus funds.

The first phase of the campus is expected to cost more than $103 million. The campus will include a 179,200-sq. ft. administrative centre and a separate garage for repairing police vehicles.

The second phase, which includes a 48,500-sq. ft. firearms range and police and fire training centre, was postponed indefinitely by city council as a cost-saving measure last year.