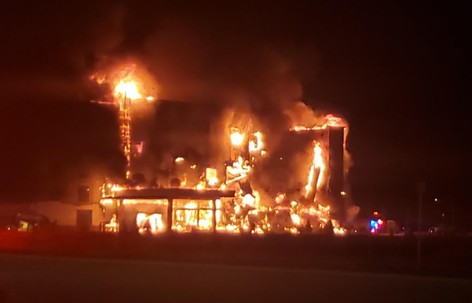 An overnight fire has destroyed a hotel under construction on Stirling Crescent in the Highway 400 employment lands area of Bradford West Gwillimbury.

South Simcoe Police say a 911 call was received at 12:25 a.m. from a citizen at the nearby park-n-ride who noticed flames. Bradford-West Gwillimbury Fire and Emergency Services responded to find the fire was well involved on the ground floor and spreading upwards to the second and third floors of the six-storey building.

Other than concrete stairwells, the entire construction was made of wood, with no safety systems installed yet. A 95-room Hampton Inn and Suites and a standalone drive-thru restaurant were being built.

Bradford’s Fire Chief has said the cause of a fire may never be known.

“Mutual aid was activated, and I would like to thank firefighters from New Tecumseth, King and Innisfil for their assistance,” said Fire Chief Jim Kay. “Their support has been exceptional – at the height of the fire we had more than a dozen trucks and over 50 firefighters on scene, as well as the South Simcoe Police and Simcoe County EMS. Fortunately, there were no injuries.”

Firefighter used heavy-lifting equipment to move piles of wood to ensure any hot spots and smoldering areas are put out. A grass fire that ignited during the blaze was also extinguished. Chief Kay noted that the cause of the fire is not known but does not appear suspicious in nature.

“The firefighters did a tremendous job and I am relieved and grateful that there were no injuries sustained in fighting the fire,” said Bradford Mayor Rob Keffer. “This hotel is going to be an important development for our growing Town, and while it can certainly be rebuilt, it’s terrible to see such a loss.”

The hotel is to be a Hampton Inn & Suites, a member of the Hilton family of hotels.