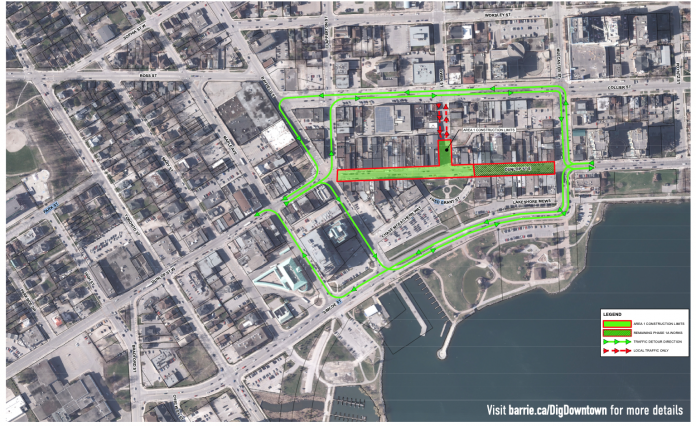 Barrie’s Downtown Dig has resumed and Dunlop Street is in the midst of a $13-million streetscape facelift stretching from Mulcaster to Toronto streets.

The downtown Business Improvement Area (BIA) is contributing $300,000 to the project that when completed will feature a streetscape that maintains two-way traffic and includes reconfigurable parking areas that can be used for either pedestrian space or parking depending on time of year and demand, according to a staff report.

Plans call for a focus on pedestrian safety and accessibility, and better lighting, visibility, and service opportunities for businesses along the strip, such as on-road/boulevard patios. “The design concept includes pedestrian friendly, aesthetically enhanced streetscape design elements within the boulevard and roadway,” reads the report.

The first part of the project, from Mulcaster Street to Owen Street, in the centre of the downtown, began last fall, and was recently completed. The next phases are:

“This project is necessary to replace aging infrastructure in Barrie’s downtown. Above ground, the project will improve the pedestrian experience with wider sidewalks, while providing downtown businesses with more attractive and accessible storefronts. New streetlights, planters and trees will make for a refreshed and greener downtown,” says the City, adding that all businesses on Dunlop will remain open during construction.

“The design concept includes pedestrian friendly, aesthetically enhanced streetscape design elements within the boulevard and roadway,” reads the report. They include:

According to staff, the additional funds will come from these reserves through reductions from other Capital Projects in the 2019 Capital Plan.

“Staff will mitigate impacts on the local businesses and the patio season and have developed the schedule accordingly. However, it is subject to weather conditions and assumptions made, such as a shorter patio season in 2019,” reads the report.

View the interactive map on Discover Barrie  to see road closures, detour routes and upcoming events in the downtown area or visit barrie.ca/DigDowntown to learn more about the projects.