Concerned citizens, the Rescue Lake Simcoe Coalition, and Simcoe County Greenbelt Coalition applaud those elected officials in Barrie and Innisfil who “took a stand for Lake Simcoe” by refusing to endorse the Bradford Bypass project.

“The arguments for saving Lake Simcoe were at the forefront, thankfully,” says Claire Malcolmson, Executive Director of the Rescue Lake Simcoe Coalition.

“We have been able to caution municipal elected officials of the risks of blindly having faith in the province’s new environmental assessment process. And that’s because their process is to build now, and assess and mitigate as you go. That’s not responsible, and that’s no way to treat the most sensitive wetland in the Lake Simcoe watershed.”

Advocates argue that the spirit of the province’s Lake Simcoe Protection Plan is being ignored while some politicians “promote a highway that will add salt to the delicate aquatic ecosystem, accelerate climate change, destroy provincially significant forests and wetlands, and does a poor job of protecting species at risk”.

They say misinformation is being perpetuated by some local elected officials, Minister of Transportation Caroline Mulroney and the MTO’s Bradford Bypass team.

Concerns include that “early works” like bridge supports are proposed to be built before the Environmental Assessment (EA) is complete.

Mulroney is quoted by Bradford Today saying; “By early 2022 construction will be able to start on Yonge Street. We want the Environmental Assessment to be completed, that is critical.”

“Starting construction before studies are complete would make the EA process just a show, and one that does not influence the decision about whether to, or where to, build a road to relieve traffic congestion in the Town of Bradford,” the coalition wrote in a press release.

“If you can’t get basic information and consistent facts about the highway answered, you have to ask why?” asks Margaret Prophet, Executive Director of SCGC.

“A government “for the people” should want people to be informed and involved. What we have here is a process that is shrouded in inconsistencies, secrecy and obstruction and that should concern everyone.”

The province’s website for the Bradford Bypass says that through the Class EA process, MTO will complete a Transportation Environmental Study Report (TESR) which will document:

Advocates are also concerned that the Bypass will become another 407 boondoggle. Neither the MTO nor the Minister will directly answer if this road will become a toll road built for future private investment.

“Residents who plan on using the Bypass need to know whose pockets they’re going to be lining”, said Prophet.

“Will truck traffic move out of free roads to use a toll road? Not likely. Will the public pay the price of the highway’s impacts just so private corporations can make mega-bucks? “Build now, figure out details later” isn’t how a huge highway project should proceed, especially when we have people’s water, climate and health on the line.”

$700,000 in grants available for large projects that will bring housing and jobs to Orillia 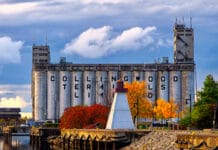