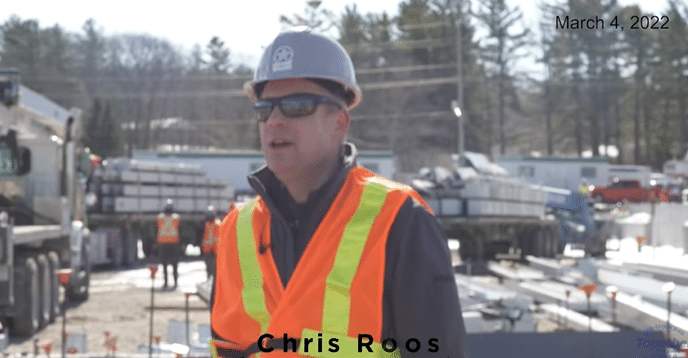 The family of a former Mayor of Wasaga Beach has donated $10,000 to the town’s arena and library building project.

At a recent cheque presentation, The Patterson family talked about how important the old arena is to them. In recognition of the financial support for the building project, a change room in the new arena will carry Patterson’s name.

This is the latest of several large donations to the project from the community, including $1 million from Zancor Homes and the Cortellucci family.

“The Cortellucci family and Zancor Homes build in Wasaga Beach because we believe in this community,” Fabrizio Cortellucci said at the groundbreaking.

“We know that the twin-pad arena and library will be a real gathering place for people and it honours us to play a role in making this important new space a reality,” he said. Colliers is the project manager, MJMA is the architect and Aquicon Construction was named as contractor for the $44 million project last September.

“Aquicon is delighted for the opportunity to deliver the Wasaga Beach twin-pad arena and library project. We look forward to working closely with the town, consulting and trade partners to bring this exciting community space to life,” Aquion president Daniel Aquino said in a news release.

Brampton-based Aquicon has built several municipal projects, including the Atlas Tube Recreation Centre in Lakeshore, the Bostwick Community Centre in London, and the Sherwood Community Centre and Library in Milton. All these facilities feature twin-pad arenas and libraries.

Construction is underway at the site, with steel arriving at the end of March.

All subgrade foundations are in place and the elevator shaft is visible at the centre of the site.

“That’s exciting to see things starting to grow up from the ground,” Chris Roos, recreation director, said in a video update at the construction site.

“Significant progress is continuing to happen, even though we’re under winter weather. Check back in April, and I’m certain there’ll be some exciting developments on what you see today.”

The twinpad arena includes two skating rinks – one designed for large spectator sporting events (900 seats) and the other for community programming (200 seats).