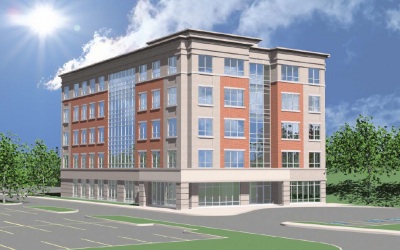 Work is well underway in developing the Little Lake Seniors Community in Barrie. Once completed, the multi-phase project is expected to include a medical centre, a condominium development and a retirement community.

The project’s first phase, a five-storey 50,000 sq. ft. regional community health centre, has been designed by MCL Architects Inc. and is being built under Brimanor Construction Services Ltd.’s construction management supervision. President Robson Knapp says the first phase is expected to be completed in October, followed by later stages in the next few years.

Though a harsh winter slowed the project by about two weeks, Knapp says work is well on track to meet the December 1 occupancy deadline. “By early July we were able to begin the third floor core slab, followed by the fourth floor and then the roof.”

Steel framing began on the ground and moved upwards once the third floor had been placed. Interior fit-up work is expected to begin in August.

Though Knapp says this kind of project is straightforward for his company, the project’s development is somewhat complex to provide comprehensive seniors’ housing for the region.

“There is a five-acre parcel of land in the centre of the project set to become 360 condominium units with amenities including a pool, fitness centre, café and salon,” Knapp said. “That development though is contingent on the completion of the bridge bypass which is at least a two-year project.”

He says the Ontario Teachers’ Pension Fund also plans to build a 150 to 170 bed retirement home including assisted living and memory care housing options. This phase should open next summer.

“When everything is done you can buy a condominium, be guaranteed a doctor through the medical centre and have the retirement community adjacent for flexible assisted living when those services are required,” he said.

The centre will include family doctors, specialist, minor surgery services, a pharmacy and lab, optometry, health and wellness services, nurses and nurse practitioners.

Knapp says Brimanor Construction Services Ltd. has developed an expertise with this type of project, having constructed several others across the province.