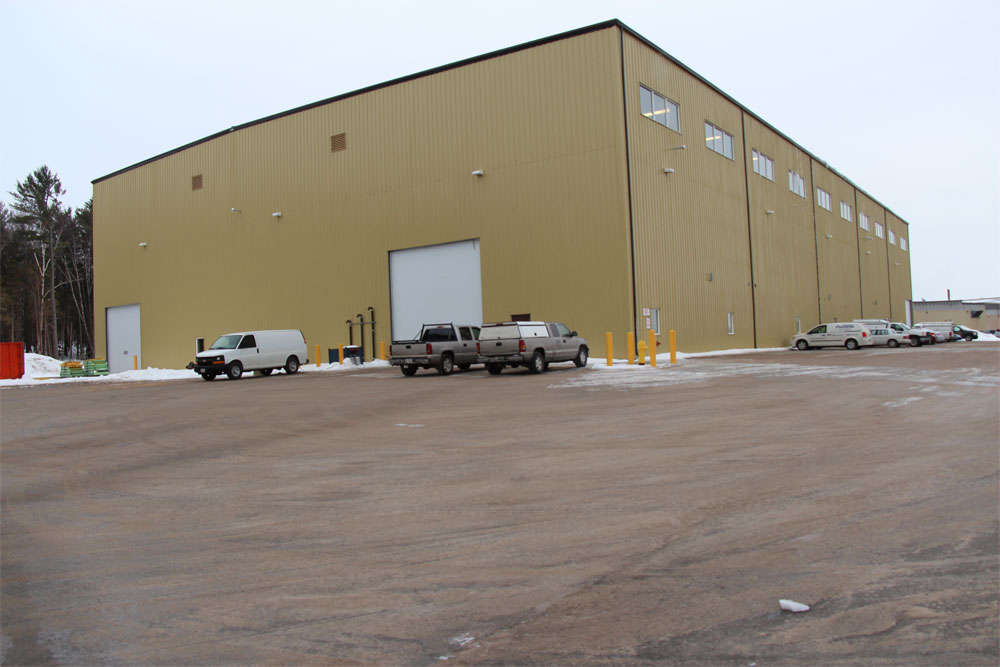 Kubota Metal Corporation’s (KMC) new 39,000 sq. ft warehouse recently attained partial occupancy as the company began installing its own equipment, expanding its 78-year presence in Orillia. The plant is expected to be fully operational by June.

Constructed under the direction of Barrie-based general contractor Bertram Construction, the $13.5 million plant will produce TXAX-brand friction material (a non-hazardous alternative to asbestos) for use in the production of brake pads.

Matthew Webb, senior manager of technology and projects at Kubota, says there are currently two plants in Japan that manufacture this product, but that the growth of the North American automotive industry created an interest in producing the product closer to where it was needed. “It makes sense to have a source here to support the growth we see. Kubota is committed to the development of society on a global basis, and this product is better for the people who work with it and those who will use it,” he says.

Bertram project manager Mark Campsall says the site provided the project’s greatest challenge. The new warehouse is on KMC-owned land adjacent to the existing plant. “The project cost increased due to earthworks issues,” he explains. “There were some design changes that affected it as well, but there was bush clearing and levelling and then soil issues as well to contend with, which had a big impact.”

“The existing plant in Orillia is a foundry which makes steel alloy castings,” says Webb. “The two divisions are not at all connected but the location here, close to truck transport and on an expanse of land we already own, is convenient in many ways.” 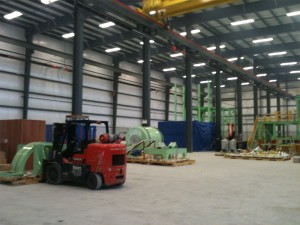 Because Orillia plant’s design was based on existing facilities in Japan, Webb says all of the growing pains and hiccups had been previously dealt with. The Canadian plant is an ‘out of the box’ mirror of what was done there, using information drawn by people who were part of the original process.

Campsall says a unique aspect of the project for him was the translation services required. “One of Kubota’s key representatives was from Japan and didn’t speak English so all of our meetings involved a translator. I’ve never had that experience before,” he notes.

The pre-engineered, 50-foot tall, steel building features a typical concrete foundation and exterior siding, but required the installation of beams running the length of the building in order to support the two three-ton cranes KMC needed for the plant.

The project used local trades over the seven months of construction, and there were about 20 people on site at any given time, Campsall says.

Northstar Engineering and Technologies Ltd. engineered and designed the mechanical, electrical, lighting and plumbing systems for the base building. Founder David Long says state-of-the-art equipment was installed, including a ventilator/heating and air conditioning technology package from Lifebreath (a Canadian company) to provide HVAC to the lab and office areas.    “Schwank radiant tube technology was employed in the plant areas for heating,” Long said. “Safety ventilation for vehicles (delivery and product shipments) was provided using Honeywell hazardous gas detection systems.”

“We are very pleased with the work the trades have done and the city was very co-operative and supportive at every phase,” Webb says.

One of those trades was BC North Electric of Muskoka, a family business with three decades of experience in electrical installations. Owner Craig Clairmont says he was pleased to be part of the Kubota project and all it represents. “You don’t see a lot of expansion on the manufacturing side of things so we were happy to see this happening and be part of it.”

For its part, the City of Orillia became a partner in the project before construction commenced. Economic development manager Dan Landry says in 2010 the city introduced a moratorium on development charges and Kubota was one of two companies to take advantage of the offer. (The other was CCI Thermal Technologies, which doubled the size of its existing plant.) Landry says that at the time, the company was looking to expand within North America and were drawn to consider Orillia because of the moratorium. The city also worked with Kubota to expedite the development approval process. “We had lengthy pre-consultations with Kubota, city staff, consulting engineers, and other members of the team,” Landry said. “It gave everyone a sense of what needed to be done, who they needed to connect with and how things would progress.”

Landry says the early dialogue allowed things to move forward quickly. “There are a lot of rules that have to be followed in this process but things can move faster when everyone is pulling the same way,” he says. “There is a misconception that municipalities are slow-moving but this shows things can be done better through a concerted effort and hopefully, this will be a model for us moving forward.”

Orillia’s strategic plan called for a focus on ‘greener industries’ so Kubota, with its global face and focus on a healthier planet, is a good fit. “We are pleased with Kubota’s expansion and look forward to seeing the plant open,” he adds.

Bertram Construction has been in business in Simcoe county for more than 75 years. The third-generation, family-owned and operated company serves the commercial, industrial, institutional and multi-unit residential sectors and works with clients to provide innovative cost-saving ideas.

The leading North American supplier of heat-resistant cast steel products, Kubota Metal Corporation, Fahramet Division (KMF) has been based in Orillia for 78 years, originally supplying the southern Ontario  mining industry. The business has evolved to provide heat and corrosion-resistant alloys for the petrochemical and steel industries.

A subsidiary of Kubota Corporation, Japan, the company is committed to becoming a global and diverse operation focused on products that are good for both people and the planet.