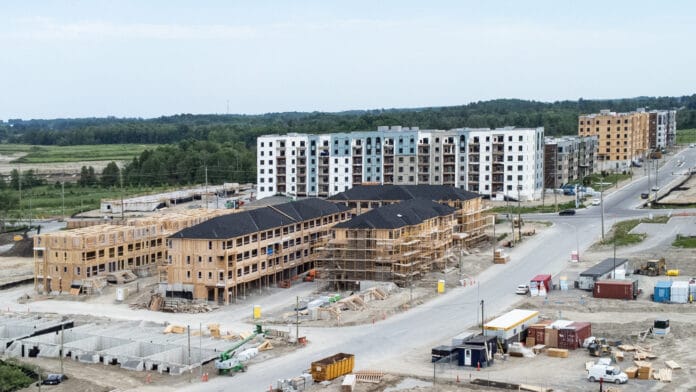 With more than 100 proposed development projects currently listed on the city’s website, what does that development future look like in the post-COVID world?

Michelle Banfield, director of development services with the City of Barrie notes that COVID, in general, caused delays on some projects due to labour and material concerns. Until developers move forward with next stages in applications, she says it is difficult to know how quickly or in what adjusted state some of these projects may move forward.

Blair Chalmers, Barrie Construction Association president, says many projects are coming in significantly over budget, based at least in part by sub-trade prices. “We are hearing stories of structural steel pricing being qualified for only seven days, and in the public procurement space, that is not nearly enough time to get approvals through.”

He says that kind of fluidity in pricing is forcing contractors to take a hard look at how much risk they are willing to take, to re-evaluate how they price jobs, weighing the risk of being competitive with taking an eventual loss on a project. He says it may also be slowing the forward movement of new projects as buyers of construction may be holding off a bit to see what will come next, waiting for more concrete assurances the market will recover.

For publicly funded projects that may have a use it or lose it deadline, Chalmers says price increases are bringing projects ahead up to fifty percent over budget, leaving contractors to play a game of ‘what can we do’ to bring this closer to what the customer needs. Options may include changing design features, or simply cutting additions that had been planned, focusing instead on the renovation aspect of a project. “With public projects needing two to three years to get through approval and funding, you can imagine the market today is significantly different from what it was in 2019.”

Chalmers says though in favour of contractors, is the large volume of work available, which allows many to build in the cushions they will need.

Banfield notes that Barrie had a banner year for both development applications and building permits during COVID (2020 and 2021). “The biggest change was just ensuring that we could do our best to make sure everything moved efficiently and effectively through the process. In fact, during the pandemic, we were recognized by BILD as the #1 municipality in the GTA for moving housing projects through the development approvals process.”

Several large projects that have been approved – including the 759 Yonge St Project – 1,326 residential units and approximately 2,787 square metres (30,000 square feet) of retail/commercial at the base of mid-rise buildings adjacent to the Barrie South GO Station and along the Yonge Street corridor – are still awaiting final site inspection, but will help the City move forward in its goals for 2022.

“Projects such as these are critical to the City meeting its annual intensification targets,” says Banfield. “Development proposals that feature higher density and low-rise built forms are critical from a housing affordability perspective as they provide affordable and attainable housing options for low- to mid level income households.”

Banfield notes: “The development at 759 Yonge Street is located within a Major Transit Station Area (MTSA). Yonge Street itself is recognized as an intensification corridor and planned to facilitate low, mid, and high rise development. The City envisions that lands in the MTSA and along intensification corridors will develop into walkable, compact, and complete communities over the life of the plan, transforming Barrie into a mid-sized and urban city.”

Chalmers calls Barrie the economic center of Simcoe County with respect to the work currently going on, noting that the market is busy with government funded projects focused on air quality, charged by COVID, and building envelope upgrades, driven by global warming. “Many schools have funding for cooling spaces within their structure centered around spaces like the office, gym, library and childcare centers which were flooding the market pre-pandemic. Now you have the addition of fresh air provision requirements which are seeing mechanical contractors reporting they are exceedingly busy.”

And while busy, these contractors are challenged by both volume and demand, with heating and cooling units taking as long as ten months to acquire and prices spiking, driven by the unknowns of both material and fuel costs.

Across the industry Chalmers says the subtrade capacity has been consumed, challenged by the volume of projects and a void of skilled labour as experience and expertise retires. “Government is providing funding incentives to train apprentices but that takes time, and many sectors are finding it challenging to have people with experience in key roles.”

He says some of the old ‘time in the seat’ can be offset with new technologies that require less practical experience, but those technologies then are also an investment. “Contractors really have no choice but to invest in technology to keep the pace.”

Part of Chalmers’ role within industry also includes serving on the Board of the Council of Ontario Construction Associations (COCA), which is currently lobbying the Canadian Construction Association (CCA) for changes to construction contracts to ensure they more fairly distribute the risk of contract delays, taking at least some of the burden off contractors, in light of the challenges brought on by COVID.

“The Pandemic will have a long-term impact on this industry,” Chalmer said. “In 2020 we had a reasonable volume of work but that has been met with huge uncertainty since. There was a huge cost associated with shutting down projects in 72 hours as was initially required, and then another with the back to work that was permitted but with extra protocols required.”

Confirming these on-the-ground analyses, BuildForce Canada predicted earlier this year that: “Ontario’s construction market is expected to see labour market challenges throughout the forecast period … but a growing inventory of major infrastructure projects and a projected recovery in commercial building construction is expected to create growth across the forecast period and throughout the province’s discrete regions.”

Chalmers says the industry is resilient and has certainly seen economic ups and downs over time, learning how to work to keep core staff engaged, changing margins as supply and demand factors back in. “This industry has a get it done attitude that serves them well in challenging times and they will do what they need to and get it done.” 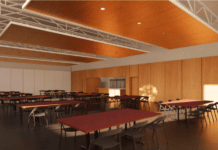 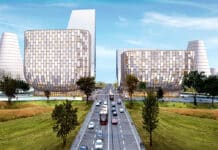