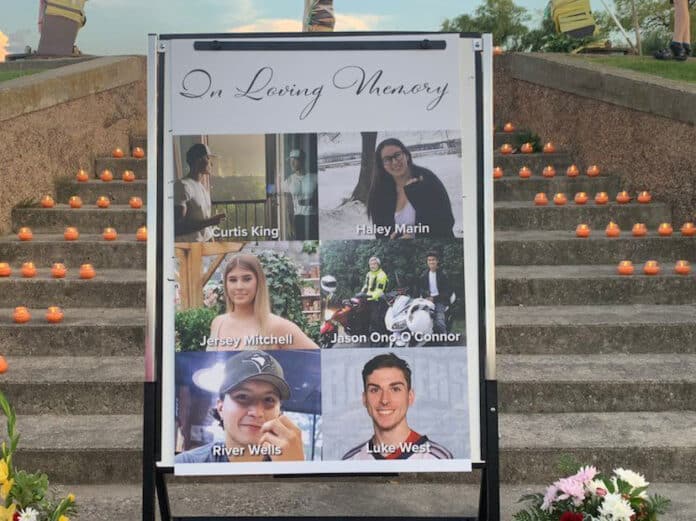 Hundreds attended a candlelight vigil in Barrie Saturday night for six young adults who were killed in a single vehicle crash last weekend at an active construction site.

The young people who died in the crash — Curtis King, 22, River Wells, 23, Jason O’Connor, 22, Luke West, 22, Jersey Mitchell and Haley Marin, 21 – were reportedly on their way to the casino at Georgian Downs early Saturday morning when the accident occurred. Residents say McKay Road is often used as a shortcut to and from the venue.

They were reported missing Saturday and found by a police officer around 2 a.m. Sunday.  Their vehicle had breached a barrier and fallen into a concrete tunnel access shaft.

The project is the first phase of infrastructure expansion to support development north and south of McKay Road. Water and wastewater service will be extended south from Salem Road along Veterans Drive, then west along McKay Road, the city’s project website says.

Work started last spring on a new sanitary sewer along McKay Road and the first of five tunnelling shafts has been built. “Motorists are reminded that there is no access through the road closure or work zone,” the city’s website says.

The design-bid-build project’s team is made up of the City of Barrie, designer Schaeffers Consulting Engineers and a builder (Salem Landowners Group with the DG Group). A spokesperson for Schaeffers did not immediately respond to a request for comment.

Community members continue to question if the safety precautions in place at the McKay Road construction site were adequate.

Ben Scipione, director of health and safety at Hamilton-based Paramount Safety Consulting, said he believes the pit had been barricaded by a 3.7-millimetre construction fence and was not provided with lighting. He noted that along with a memorial on the side of the road, modular concrete barriers are now on either side of the pit to prevent access – as well as construction pylons and metal fencing.

Scipione said he believes the concrete barrier was installed Tuesday afternoon in a “reactive approach,” suggesting that provincial investigators are likely working to determine whether all safety regulations and standards around construction excavation had been followed.

“You can’t just put a steel fence up there and not expect somebody to get through.”

Barrie Police investigators remained at a municipal work zone near the city’s southwest border late this week where a vehicle is believed to have plunged into a large concrete pit at the site early Sunday in an incident that took the lives of six young adults.

A police spokesperson on Thursday said a team of officers was at the project’s site in the area of the MacKay Road West and Veterans Drive, with a portion of McKay Road cordoned off by police as the investigation continued.

Crews with City of Barrie-contracted sewer and water main contractor the Condrain Group were at the site as well, though a spokesperson for the Vaughan-based company, citing the investigation, declined to comment on any site safety precaution changes since the accident and on the potential length of work stoppages.

A Ministry of Labour, Immigration, Training and Skills Development spokesperson said a ministry inspector has attended the site as well, adding that the ministry had received no complaints about the work site prior to the incident.

“Our investigation is ongoing,” the spokesperson said. “The length of the investigation will depend on the complexities of the case.”

Michael Prowse, the southern Ontario city’s chief administrative office, said the roadway around the construction site has been fully closed and signed since the spring as workers provide new sanitary sewer and water main installations.

“The area was a construction site being managed by city contractors to deliver the design, construction and financing of the water, sewer and road work along McKay Road and Veterans Drive to service new development in this area,” he said.