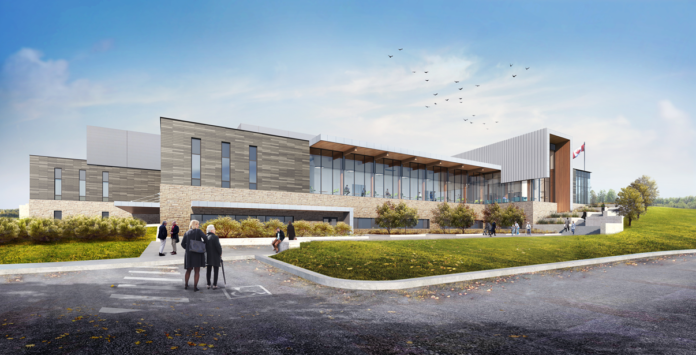 Ontario has awarded a contract to Bird Construction to build a new hospital in Markdale. The 68,000 square foot facility on Toronto Street was approved last week, Premier Doug Ford and Deputy Premier and Minister of Health Christine Elliott announced.

“This is a monumental event for the province,” Ford said during a virtual ground-breaking.

“It’s not every day that you start construction on a new hospital and I’m thrilled to announce that we’re investing up to $53 million to support the development of a new Markdale hospital, which is in addition to the $3 million we invested for the planning and design.”

GBHS issued a call for tenders to build a new hospital last summer. After reviewing the bids, the GBHS Board of Directors recommended to the Ministry of Health that Bird Construction be awarded the contract.

Bird Construction has offices across Canada and has built many large health care facilities. The company has now started preparations on the site.

“We are honoured to have been selected to build the new Markdale Hospital. Bird Construction has been building important infrastructure in communities across Canada for over 100 years, including a sizeable resume of healthcare related facilities,” said Teri McKibbon, president and CEO, Bird Construction.

“We look forward to successfully delivering this project and contributing to the future of healthcare in Grey Highlands and surrounding areas.”

Construction is expected to last two years and the new hospital, to be built next to the Grey Gables long-term care home, will include inpatient beds, a palliative care room, 24/7 emergency room with four exam and treatment areas, laboratory, diagnostic imaging services, physiotherapy, space for ambulatory care clinics and two ambulance bays.

“I’m incredibly proud to announce today we are fully approved and we’re getting shovels in the ground to build the new hospital. I congratulate the local community whose people rallied around this project and raised millions of dollars in its support,” said Bruce-Grey-Owen Sound MPP Bill Walker. “We have been looking forward to this day for many years and I’m thankful to Premier Ford and Minister Elliott for moving forward quickly to make this a reality.”

Provincial and area politicians noted the construction kick-off comes nearly two decades after local efforts began towards building the new hospital, which the province approved in 2015.

“I’m so excited and proud to see this project moving forward,” said Grey Highlands Mayor Paul McQueen. “I want to congratulate all those who worked so hard over the past few years to secure this approval. Not only will this project stimulate our economy during the construction phase, but it will help to attract residents and businesses to the area once the hospital is completed.”