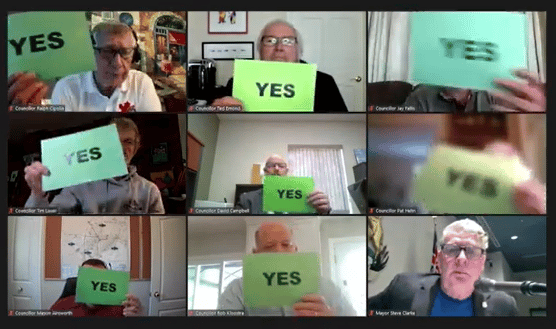 After almost a year, construction is expected to resume this month on the Centennial Drive Phase 1 Reconstruction Project in Orillia.

At a special council meeting, city councillors voted to spend an extra $1.65 million over the approved contract price, approving a ‘change order’ to restart construction. This brings the cost of the project to $12.25 million from $10.6 million.

The change order was authorized through legal negotiations between the city and contractor John Bravakis Enterprises Inc. (JBE).

Construction was halted due to challenges with contract interpretation and implementation earlier this year.

According to a news release, the change order is subject to execution by both parties and is expected to be completed within the next week.

Once the change order is approved by both parties, JBE will remobilize its workforce and be onsite within a week, says the city’s release.

“When JBE remobilizes, residents can expect to see a hub of activity on site.”

The revised construction schedule means installation of the new sanitary sewer beneath The Esplanade will occur over the winter and spring of 2022/2023, and that the new Cedar Island Road pump station will be complete in the fall of 2023.

“We are pleased that through negotiations we have reached a resolution that is anticipated to result in construction activities beginning again shortly,” Mayor Steve Clarke said in the release. “While there will be additional expenses to get this done, the city’s negotiations were focused on the successful completion of the project and careful cost mitigation.”

“We appreciate the community’s patience during negotiations, especially those within the vicinity of the project area. We recognize this has been a frustrating situation for all parties involved and we look forward to having the change order for the contract solidified and moving the project forward.”