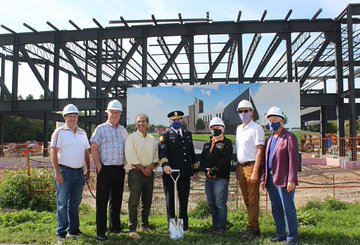 Construction is currently underway and is expected to be completed by late 2022 or early 2023.

The 21,000-square-foot facility will have two floors with three tandem truck bays, which will hold a pumper, ladder truck, and the Platoon Chief response vehicle.

It will be staffed with Fire Services, prevention, training, and administrative staff, as well as feature meeting facilities on the second floor.

Geographically central to the future growth of Pickering, the new facility will allow crews to provide the best response times and service coverage across the City.

Zents Drive also holds a special place in the hearts of many, as it was named in honour of firefighter Ray Zents, who passed away in 2003 from work-related cancer after dedicating 25 years to Pickering Fire Services.

“Above all, protecting the members of our community remains our top priority,” said Fire Chief John Hagg. “We look forward to occupying our new headquarters in the near future and serving our residents.”

The new station is in an area that’s growing and seeing increased demand.

Hagg said they’ve hired 10 firefighters in the past year as many are retiring from the job.

“This fifth fire station gives us the opportunity when we get one good size fire, four stations are busy, working at that fire. This one gives us an opportunity to keep one station back and available to respond to other calls so it’s a big step for us without calling in Toronto or Ajax.”

The city has already started planning on a sixth fire station nearby to contend with the area’s growth.