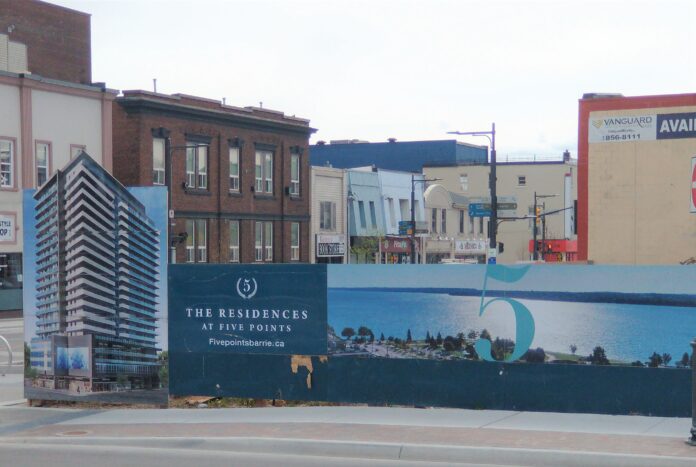 A 20-storey condominium project in downtown Barrie will not go ahead, the developer says, because sales failed to reach 85 per cent and construction financing could not be arranged by May 1.

BarrieToday published a portion of an email sent to buyers in early May.

“Although the project got off to a good start, COVID-19 has proven to be a hurdle that the project cannot overcome,” Advance Tech Developments president Joseph Santos wrote in the email. “The project’s financial partner was unable to continue its involvement in the project and the state of emergency with on-again, off-again lockdowns and restrictions have hampered our ability to achieve meaningful additional pre-sales.”

The high-rise tower planned for the corner of Bayfield and Dunlop Streets had been touted as an important project that would jumpstart a revitalization of the city’s downtown core. It included 208 residential condominium units and commercial space.

Agreements of purchase and sale were conditional on the developer selling 85 per cent of the units and securing financing for construction of the project by May 1. It is anticipated that buyers will receive refunds.

Under the provincial growth plan, Barrie is forecast to grow by an additional 107,000 people by 2041, bringing the number of people calling Barrie home to a forecast of 253,000. The city is also supposed to have another 53,900 jobs to employ all those newcomers. It means more intensification within existing boundaries and high-rise developments, as the city grows up rather than out.

In 2009, the city completed an intensification study that assessed Barrie’s capacity for meeting growth targets in the province’s growth plan, provided a vision and established priorities for achieving prescribed growth targets, while also recommending new Official Plan policies and performance standards for the zoning bylaw that would facilitate the type of development envisioned for the intensification areas.

Cost Escalation in the Construction Industry