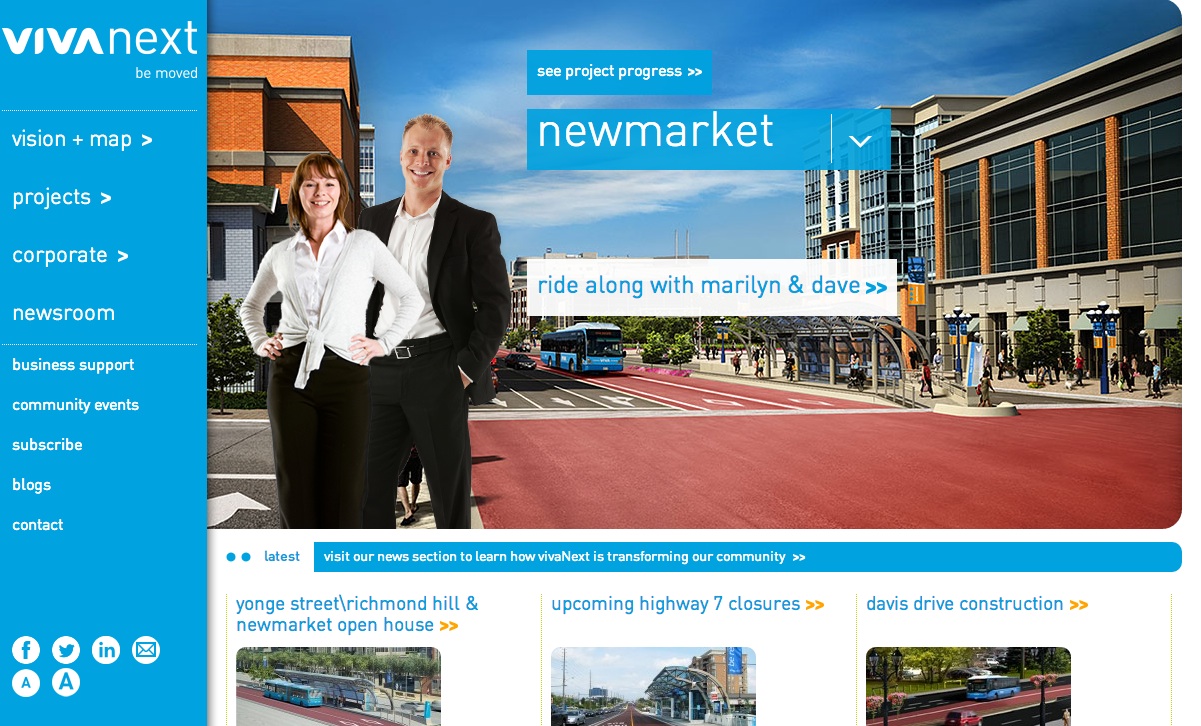 Together with Metrolinx and The Regional Municipality of York, Infrastructure Ontario released a request for qualifications (RFQ) to pre-qualify and short-list companies to deliver the next phase of York Viva Bus Rapid Transit (vivaNext) rapidways in the cities of Vaughan and Markham.

The expanded vivaNext rapid transit system will make it easy to travel in and around York Region and connect to other transit systems across the Greater Toronto and Hamilton Area (GTHA). In Vaughan, the next phase of vivaNext rapidways will include approximately 12 kilometres of dedicated bus lanes on Highway 7 with nine median stations and one curbside station. It will run from about Helen Street to Interchange Way/Edgeley Boulevard, and from Bowes Road to Yonge Street via the existing Centre Street and Bathurst Street Viva route.

In Markham, the next phase of vivaNext rapidways will include approximately two kilometres of rapidway along Simcoe Promenade and YMCA Boulevard with two curbside stations. Flexibility will be built into the design to allow for coordination with future development in Markham Centre. The RFQ is the first step in the competitive tendering process to select a company to design, build and finance dedicated bus lanes, stations and boulevards.

A copy of the request for qualifications document is available at www.merx.com. These vivaNext rapidway segments will be delivered using an alternative financing and procurement (AFP) delivery model – a public-private partnership model – that research shows provides time and cost savings. Teams shortlisted from the RFQ process will be invited to respond to a request for proposals, expected to be released in summer 2014. Infrastructure Ontario is responsible for managing the AFP procurement process for these segments of the vivaNext rapidways. Once the AFP contract is awarded, York Region Rapid Transit Corporation (YRRTC) will continue to project manage all day-to-day construction operations and York Region will operate YRT/Viva service. Metrolinx will retain ownership of the assets.

The York Viva BRT project received $1.4 billion (2009) from the Government of Ontario, and is an example of The Big Move in action – Metrolinx’s 25-year plan to implement a common vision for transportation in the GTHA. The project is being implemented by Metrolinx, an agency of the Province of Ontario. For more information about Metrolinx, visit metrolinx.com.