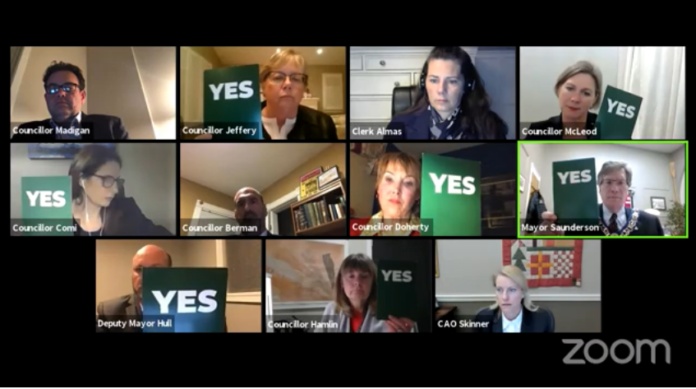 The Town of Collingwood has paused all new development for at least the next year, to address drinking water capacity concerns.

“This is a very difficult situation and we have run out of capacity before we have our plant expansion completed,” said Mayor Brian Saunderson.

The current expected date of completion for the water treatment plant expansion is the end of 2025.

“What we have now is a capacity issue and we’re not going to make it to 2025 at our current growth rate without taking some steps,” Saunderson said. “This is an extremely difficult situation. We have seen increased demands in our growth, but we have also known about this issue and we have to deal with it. There is no alternative. Inaction is not an option.”

An interim control bylaw was approved to prohibit new construction unless the project already has a building permit from the town. Renovations are permitted, but only for projects where the use of the building won’t change.

The one-year moratorium was recommended by town staff because the water treatment plant is running out of capacity for new development. It will remain in place while land-use planning studies and water allocation framework are completed.

According to the staff report, the town’s water treatment plant can produce enough treated, potable water for 1,941 more single-family dwelling units in addition to existing homes and those with building permits. However, the system could be “overtaxed” in the winter when cold water requires more work to treat at the chlorination step.

The bylaw was approved after seven hours of public and in-camera meetings and dozens of speakers opposed to the plan, including lawyers, developers, consultants, and residents. Several stated the developments they were representing should be exempt from the moratorium because of the stage of planning they had completed, or because the homes had already sold.

According to a staff report, the measure was needed because “a recent significant increase in development applications and growth in Collingwood has renewed concerns about the ability of the existing water treatment plant to service the desired level of growth while the planned expansion is underway.”

“While development pressures today implement stress on the available capacity, the same analysis should be completed on the wastewater treatment capacity available at the water treatment plant.”

He called the decision “an exaggerated reaction and heavy-handed measure.”

“The proposed bylaw is not simply a pause,” he told council. “In fact, to the entire development industry and those that rely on it for their livelihoods, the ICBL will even surpass the damage done by the global health crisis COVID-19.

He went on to warn that passing the bylaw will not address the concerns and the negative impacts will be devastating with the elimination of hundreds of well-paying local jobs, increased housing prices due to lack of supply, a permanent loss of hundreds of millions of dollars in lost construction activity and impact local businesses.

One lawyer represented three clients building homes in the town and he said hundreds of buyers could be left without homes.

“Our client made substantial servicing infrastructure to proceed with that subdivision and entered into purchases of sale with purchasers who are expecting our client to deliver homes,” he said.

“Our client is registered, built, received a servicing allocation as part of the subdivision registration and plan of subdivision, so I respectfully ask that the last 39 homes be exempt.”

Lawyer Denise Baker spoke on behalf of a developer that has had a site plan application under consideration with Collingwood since February 2019.

Like many speakers before and after her, Baker requested an exemption for her clients and suggested that development that is proceeding in accordance with enforced zoning bylaw and is currently in a site plan application process should all be exempt.

The study focus will include any required changes to the town’s land use planning policies and/or regulatory framework resulting from water and wastewater servicing capacity limitations.

Further, it will cover the municipality’s role in the provincial growth planning framework including the implications of water and wastewater servicing constraints for growth management within the town, servicing and implementing policies both within the official plan and as they relate to the town’s land-use planning policies and reinforcing a regulatory framework and delivering upon the strategic plan.

Council approved the interim control bylaw with a 6 to 3 vote.

Councilor Hamlin supported the motion “with a heavy heart”, saying the water issue “is one of the most difficult things that a council could deal with, especially one that is growing, that has so many developers and builders that have a keen interest.”

But according to Hamlin, implementing the interim control bylaw was the only option available.

“We can create a thousand more units immediately by tinkering with our chlorine levels and we can get another 1,900 units over the next two to three years.

“We have thousands of units that are in our pipeline right now and without some system in place that our land use planning study is going to give us … on how to deal with this shortage of water, we will be in a position where we will have an over scription of water when units are built and the what happens to our water system? It will not be functioning properly.”